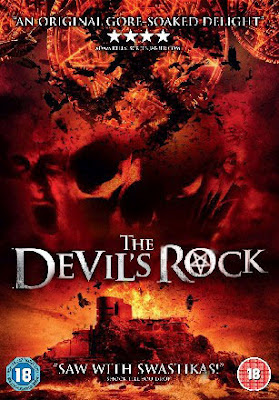 Editor's Note: For those who have indicated that The Devil's Rock isn't a part of Netflix's database we do apologize for the mistake and hope that you nonetheless found the article enjoyable.

I can assure you there is nothing in god’s name going on here.”

Of all the horror film clichés I must say I find the Nazi trying to use supernatural means to win the war to be one of the most entertaining. Nazis make the perfect villains, as we all already view them as such. Throw a demon into the mix and you are looking at one happy horror fan.

The film is about a two man Kiwi spec-ops team that is raiding a Nazi bunker on an island in the English Channel during World War 2. They come across a Nazi colonel who has found a way to summon a demon in hopes of having said demon fight for them.

We open the film with a beautiful shot of the beach our boys have landed on. Complete with barbed wire and tank busters, this looked like a shot of the beaches of Normandy on D-Day morning. We are introduced to our two commandos as they make their way up the minefield of a beach. Everything goes great from there. We get an early taste of the viciousness of this movie when our hero dispatches a Nazi with his knife.

Upon entering the bunker we are treated to some truly fantastic dead bodies provided by Weta Workshop. To be perfectly honest, this was my favorite part. It’s a fantastic way to tell your story without all that boring talking. You can read an entire story by using their wounds as words.
We then get to meet out villain, a Nazi colonel in charge of finding ways to use the occult to sway the war in their favor. This is where I felt the film stumbled a little bit. The big, bad Nazi colonel doesn’t have a German accent. I don’t know if this was explained and I just missed it but whatever the reason it was a bad choice. I really wanted to hear this man deliver his lines with a full, rich, thick accent. What I got was an SS officer that sounded like Clive Owen.

I won’t say much about the demon or it’s origins but I will say that I enjoyed every moment of it on screen. It had the perfect mixture of charm and danger.

For those Cthulhu fanatics out there, you will be treated to a solid reference to The Great Old Ones. It’s little things like that that speak to the level of care that was taken when writing this.

Overall, this isn’t something I’ll still be talking about this time next year but I did really enjoy myself. Aside from an accent mix up and some pretty serious pacing issues this was a solid genre film that will hopefully garner some attention for a filmmaker with a lot of potential.

Posted by Unknown at 2:58 AM No comments: