The bad horror movie, a common occurence in Hollywood. Will it ever end? 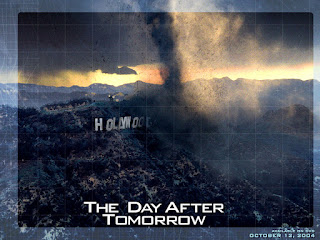 I don’t think it would be a stretch for me to say that Hollywood has put out a plethora of absolutely terrible horror movies over probably the last 30 or 35 years.

Follow along as I attempt to establish “the why” behind this common occurrence in Hollywood.

I’ve seen many horror movies, as I’m sure you have over the years and in the process I had to painfully endure watching not just really bad horror movies but horror movies that weren’t even remotely good or entertaining.

A few of those movies for me, and the memories they evoke reside in that certain place within my gray matter where every other bad memory I’ve amassed over the course of my life resides.

I submit for your approval, every movie in the “Child’s Play” series. Don’t laugh, but if you are in the minority of us that actually thought any of those movies were in fact pretty good and you saw “Dead and Breakfast” well then you probably for some strange reason enjoyed that sorry movie too. 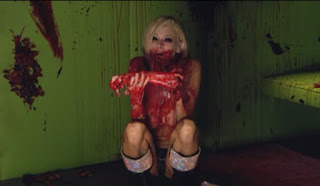 And all you zombie movie lovers, “eat your heart out”, if you even for one moment thought that the movie “Zombie Strippers” was a good movie and worth the “watch”.

Robert Englund and Jenna Jamison, for the uninitiated, had the ignominious distinction of having acted in the movie and notwithstanding their respective star-power there was no denying Zombie Strippers was a very bad movie.

Unfortunately, the “landscape” of motion picture history over the aforementioned time frame has been “littered” all too often with these types of “poorly conceived” stories.

I’m reminded of a time not long ago when movies like John Carpenter’s Halloween or Steven Spielberg’s Jaws or Poltergeist were standards during their time by which all other horror movies that were suddenly “flooding” the theaters were judged.

During this time, the late 70’s early to mid 80’s it seemed that for every “Halloween” or movie like “Halloween” that enjoyed not only theatrical success but critical acclaim and was more importantly a hit among the “horror-moviegoer-fandom” there were probably 9 more horror movies that were again, not very good and were frankly a waste of good “coin”.

Is it possible that there is something inherent to the “horror movie premise” that lends itself to bad story telling, and therefore “bad filmmaking”? Could this be the reason for the “glut” of garage we’re seeing?

If you think that that is the case then my response to you is this. Not so fast my “horror fiend”. A solid believable premise is always good for any type of movie. And so I will assure you that “the horror movie” hasn’t achieved any unique status in the area of “bad filmmaking”. I know what you’re thinking though.

Still, why all the bad horror flicks?

Okay, go with me if you will on a “retrospective trip” into the recesses of your “gray matter” and think for just one moment of the litany of terrible horror movies you’ve seen you would probably see that each of these movies shared a number of things in common. If you knew exactly what to look for you would see that other than the obvious element of each of them not being very good, the scripts that formed the bases of what you saw on the screen all lacked certain story elements.

I apologize for the sudden lesson in “script writing ” if you think it’s misplaced but all movies in Hollywood, at the script level follow some type of formula, but whether the writer has followed the formula or not, it won’t guarantee that what he has written and what is put on screen will be watch able.

Despite its genre, the universal elements of good storytelling must be in place in order for any movie to have a chance at giving the audience what it expects to see when they” put down” their hard earned dollar.

Why do we as audiences keep coming? Despite our belief that the movie to which we’ve heard about and whose trailer we’ve seen will probably not meet our expectations, we will still stand in line and pay our money to see it.

The answer is simple; Hollywood knows they’ve got us. They know it only takes one good horror movie to hook someone and make him or her a fan for life. For some fans that moment took place long ago.

Like the moment we saw the trailer for the movie Jaws, we knew we had to see it and at that instant we believed, at least I did, that having to stand in a line that stretched around the block didn’t at all seem out of the ordinary and would be worth it if that’s what it called for. 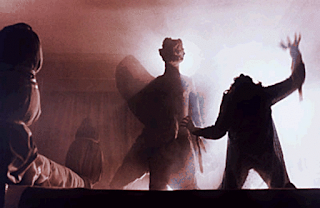 Or it happened when “The Exorcist” hit the theaters. Despite how truly frightening the movie appeared to be and all of what was being said about the movie. As far as the strange things that happened on the set of the movie during its “shooting” or how different audience members were said to have vomited while watching it or the different ones who ran from the theater due to being unable to handle the disturbing subject matter, some of us nonetheless had to absolutely see this movie.

And for some others, for people like myself that moment really took place probably a few years prior to Steven Spielberg telling us” not to go into the water” or “little Regan’s head began spinning around”.

It was the first time I had seen some of the classics like Frankenstein, Dracula and the Wolfman. It was my induction or “baptism” into the whole horror movie phenomenon that had captured so many fans hearts.

So as you can see, it doesn’t matter what the movie is. Whether it’s a good story with a solid premise or not, with a good solid cast or not, it just doesn’t matter to Hollywood. If they can get it made they will do so. 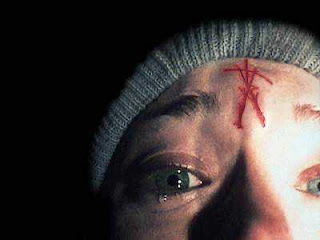 From all the aforementioned “trash” to the really good original stories like Paranormal Activity and” The Blair Witch Project” to many of the rehashed movies like the previously mentioned Frankenstein and the most recent Wolfman, the filmmakers in Hollywood know that if they make it we audiences will come, whether the movie is good, bad or otherwise.

Again, its because they’ve “got us”, we’re “hooked” and they know it.

It’s some type of strange hold they have over us. One similar to the psychological “grip” the individual has over the person who spots the wallet laying on the ground and to which, they have determined to lay claim, and despite it suddenly moving because of the string attached they continue to follow suit, in hopes of laying possession before someone else is able to do so.

Because of the promise of what may be inside. And once they get it, well by then, its already too late.

Be sure to read: Ten must-see horror flicks
Posted by Unknown at 8:33 AM 1 comment:

- just another reason for loving the horror movie

Alien was truly not only frightening but it was undoubtedly one of the best horror monsters every put on film. After seeing it after it had grew to adulthood we the audience collectively said along with the character in the movie, "oh sh*t", which basically said it all. 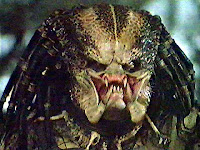 The monster in the Predator movie was like many other horror movie monsters, in that his only objective was to kill. Hunt and Kill I should say, which made the whole “intergalactic hunter” element that was added during script developement kind of unsettling. Its one thing to know that you are being relentlessly pursued by a monster who wants to kill you and something completely different to know that he wants your head on a spike as well. This movie is a proof that karma can be a real “bitch”. 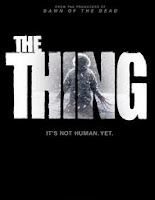 The Thing, John Carpenter’s version like a few of his other movies was very creepy. The monster in the movie like the Predator monster was from outer space as well as having an element I’d like to think was taken from Invasion of the Body Snatchers, its ability to replace humans with a version of its own, killing the “poor sap” in the process.

An American Werewolf in London


Each of the werewolves in this horror monster movie were truly frightening due to the excellent job writer-director John Landis did with things like special effects and sound engineering. Both elements can be seen and truly felt in the initial sequence where the character Jack is mauled to death and his friend David, played by David Naughton is injured. 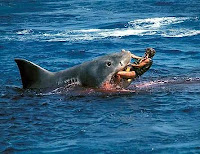 The great white shark of Jaws, given birth to by director Steven Spielberg was a monster in the truest sense of the word. The shark was everything we are not just afraid of but absolutely petrified of. Just ask Sherrif Brody's son.

Like a few of the aforementioned horror movie monsters Jaws was relentless. Maybe because he was just always hungery, I'm not really sure. I wonder had someone just told him about the all you can eat special at the "bottom of the sea" restaraunt maybe that would have been enough. No? Well I tried.

· The Beast with in

And so the “fruit” of this unholy union, a young man, and as he grew did so oblivious to what fate would bring his way, the day when the “beast” that was in him would not only emerge but would change him completely into one of the most disgustingly horrible and frightening horror movie monsters yet. 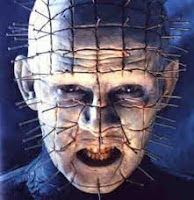 Not a horror movie monster in the same sense as the others but he certainly was frightening none the less. Not only that but he was ugly and creepy like those other demons he hung with. What I remember most about Pinhead was this, the way he looked and when he spoke although he didn’t look like what most people envisioned Satan himself to look like, he at least made me think of that chief purveyor of evil. Not only that, it was just something about him that screams, he’s someone you really don’t want to F*ck with. 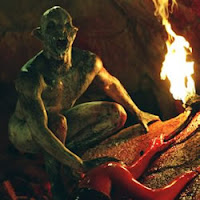 What’s worse than one truly frightening creature, an enumerable amount of course? Creatures with a predilection for human flesh, not cooked over an open flame either. We’re talking the raw kind. The kind found on those of us who are yet living and breathing. Those ugly f*ckers would not stop until your bones were absolutely stripped free of all the tasty meat every carnivorous monster needs in his diet. 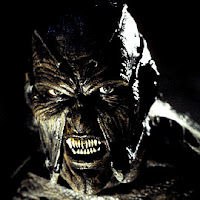 The monster in this movie was more of a hybrid monster. In other words, half man, half monster. I mean he did have a driver’s license right? What monster do you know has a set of “wheels” and likes to take it for a spin every once in a while, and in the process terrorize an unsuspecting couple or two. On second thought, he seemed to be a guy with a bad case of “road rage” if anything, he just happen to be ugly as f*ck, with a real f*cked up "grill".

Horror films
Posted by Unknown at 6:41 PM No comments: