The Woman in Black (2012) Netflix Review 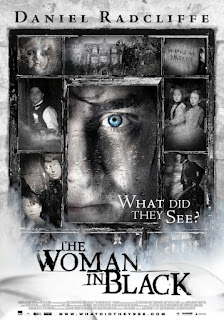 "I believe the most rational mind can play tricks in the dark.”

Unfortunately for Author Kipps (Radcliff) there are no tricks here, just a pissed off ghost and a great deal of sadness.

I want to start by saying I have not seen the original TV movie. This will not be a comparison of the two. I have heard great things about the original, so I’ll be watching it as soon as I can get my mitts on it.

The story follows a lawyer from London who is sent off to go try and sell an old house. Before he heads out we meet his son, played by his Radcliff’s actual godson. They did that to make the relationship between the two feel more genuine. It worked.

From the moment he arrives in town there is a feeling that something is off. They did a great job in creating an atmosphere of discomfort. It’s obvious the locals don’t want him there at all. I won’t go too far into the actual plot.

It’s very rare that I actually get creeped out watching a ghost story these days. The last time was Insidious and I can’t even remember a time before that. It’s all so formulaic these days. It goes a little something like this: angry ghost, jump scare, sad protagonist, jump scare, dark secret, jump scare, and a rushed attempt at appeasing the ghost…and a jump scare.

Jump scares are in my opinion the lowest form of scaring someone…there were five. With this wonderful, creepy atmosphere, there is no need for even one. Fortunately, that alone isn’t enough to make me like this any less.

Location, location, location; from the streets of London to the old house itself, these locations stepped forward and stole the spotlight. That might have something to do with how beautifully they were shot. Most notable were the aerial shots of the house and the road leading to the house.

I say give this one a chance. What it lacked in gore it made up for with genuinely creepy moments. So maybe they reached back in time for the majority of their scares, somehow it worked. There isn’t anything new here but from what I hear that was intentional.

The Woman in Black

Posted by Unknown at 2:43 PM No comments: