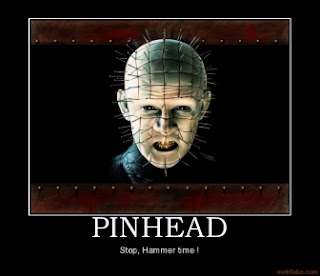 “Some things in life aren’t meant to be explored or delved into”.
-MonsterMovieMan

I’m a firm believer that people should not screw with the following things, black magic, voodoo, the occult or the box that was one of the subjects of the movie Hellraiser.

Hellraiser is a really dark horror movie. And when I say “dark” I mean it in the sense that it wasn’t the typical knife-wielding mad man style horror movie. It was anything but, in fact, the title tells you almost all you need to know about this movie.

Movies such as this make me think the writer, in order to come up with the inspiration necessary to write this type of material had to be into some really deep shit, I mean, black magic or possibly satan worship. Something I’ve thought a time or two about the king of the macabre himself, Stephen King.

Clive Barker the director was also the writer adapting the screenplay from a novel he penned some years back. I can’t say that I’ve read the book or that I would even want to, but I will say this if the book is anything like the Hellraiser movies then it has to be pretty disturbing, because if Hellraiser is nothing else, it is certainly disturbing.

For the uninitiated, the movie begins as we see a man by the name of Frank (Sean Chapman) sitting with another man in what appeared to be the country of India. The man simply asks him, “Mister what’s your pleasure”? He responds by saying “The box…I want the box”. The camera then pans down to the two separate stacks of money the man “forks over” for the box. Clearly he expected something special from it.

What he expected was sensual pleasures the likes he never experienced before. Not only did he not get “his rocks off” what he got was so much more than anything he could have imagined.

When he pressed the box at a certain point a doorway into “hell” and the demons standing at that “doorway” waiting to be summoned suddenly make an unwelcome appearance.

But these demons, the cenobites as they are called, can only be summoned or released if the box is opened. Obviously, no one in their right mind would open the box, if they knew by doing so would release demons that, by the way, take sadistic pleasure in torturing their victims.

After opening the box he mistakenly calls forth the cenobites who then proceed to kill him. Actually we can only surmise that that is what happens to him from the sight of a number of hooks tearing into his flesh and the agonizing screams he sends forth.

When they were done with him he probably felt like if not the Marquis De Sade himself had worked him over maybe a group of his disciples.

The very next scene we are introduced to two of the cenobites as they enter what looks like some type of torture chamber. A number of chains dangle from the ceiling with chunks of human flesh attached to hooks, undoubtedly belonging to the recently departed.

And on the floor 3 or 4 pieces of a man’s face. The hand of one of the cenobites comes into the frame holding one piece of the face and joins it with the others as if forming a puzzle.

One of the truly strange things about this movie is that fact that not only is Frank resurrected by the blood of his brother that leaks upon the general area where he was killed but in order for him to fully “come back” Claire, his brother’s wife and Frank’s lover (emphasis on the word lover) is tasked by Frank to seduce unsuspecting men and bring them to him so he can kill them for their blood, reasoning that if some blood brought him back from the dead, then more blood is undoubtedly what’s needed to complete his return to the “land of the living”. 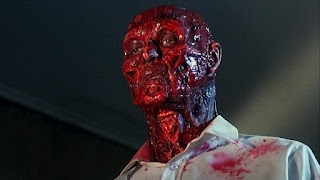 At this point Frank looks as if someone has ran him through a meat slicer, completely removing his outer layer of skin, leaving him with the appearance of a disgusting life like cadaver covered in fully exposed muscle dipped in blood.

Although, I’ve seen the movie a number of times something that is rare for me when it comes to movies I don’t like, but I will say this about the movie, it consistently succeeds in moving me each time I see it. 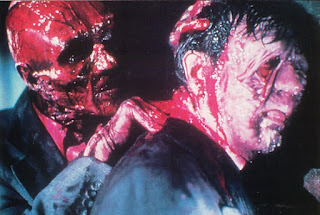 If the movie (horror in particular) doesn’t revolt or shock us or in some sense make us want to turn away from the screen because of the nature of what’s unfolding before our eyes then again the two individuals responsible for this happening, the writer and director have failed in this regard and the movie for all intents and purposes can be considered a failure.

Again, this movie moved me. It moved me because of its disturbing subject matter. How can someone not be stirred to emotion when the subject of a movie deals with demons, hell and torture? A subject that most people have a problem with regardless of their religious affiliation.

I don’t think anyone would dispute the fact that the demons are frightening and the leader of them, who goes by the name of “pinhead” portrayed extremely well by actor Doug Bradley, is in a word, unsettling to say the least. I would think because the movie isn’t very good that most horror fans affinity for the movie begins and ends with the character.


Before you leave make sure you subscribe to our Rss feed as well as leave a comment or two.

Posted by Unknown at 2:17 AM No comments: