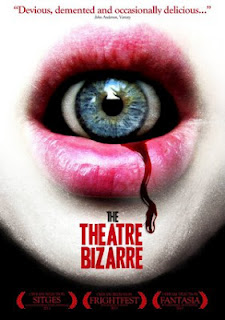 Over the last few years I have seen some truly incredible French horror films. Something more than the paint by numbers type films American audiences seem to love so much. I don’t want to watch some tame, formulaic film where the hero wins and the opposing force gets its just desserts. Here are a few that are a must see for horror fans.

1. High Tension (Switchblade Romance)- Alexandre Aja’s first big hit, this movie really caught me off guard. In the beginning of the movie our killer gets head from a severed head. It was here that the film had my attention. This film is violent and shocking. Cicile De France was fantastic…and not just because she is beautiful, she was also a bad ass. When is the last time you saw a woman beat a man’s ass with a piece of wood with barbed wire wrapped around it?

2. Inside- Show me your favorite Home Invasion film and I will top it with Inside. Home Invasion films are always pretty rough, French Home Invasion films are brutal. This one follows a pregnant woman who is due the next day (X-mas) and a very disturbed woman who tries to cut out the unborn child with a very large pair of scissors. If that description alone isn’t enough to make you want to go see this immediately, then you should stop reading now and go watch a Pixar film.

3. Martyrs- The crown jewel of French horror as far as I am concerned. This film will take you on a journey that transcends the torture porn genre and takes you to places you never thought you’d go. It is almost impossible to pinpoint what I liked most about this film because it is everything I have ever wanted in a horror film minus a sense of humor. If you are laughing during this for any reason other than how shocked or uncomfortable you are, seek help. This film is much more than just violence for the sake of violence, it’s all purpose-driven. It all means something and that brings this film straight to the next level. Don’t turn your brain off for this one, you’re going to need it.

Don’t get me wrong, Americans do produce great horror films but few of them have the balls to go where these guys took me. I will forever be a fan of French cinema.