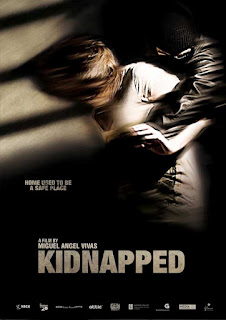 Let me just get this out of the way, I LOVE HOME INVASION FILMS. If done correctly a home invasion can be devastating (Inside). The whole idea is that you don’t have to have done anything wrong or be anywhere you aren’t supposed to be in order to suffer. The idea of someone coming into your home to deliver these horrid acts is more than chilling, it’s an attack on your very own sense of security.

Kidnapped is not the most violent film I’ve ever seen but I feel they found a good level of violence for this film’s purposes. It never feels cheesy or gratuitous, while still being able to shock the audience. I myself am as desensitized as they to come to on-screen violence but still found my jaw hitting the floor on occasion.

More important than all the gore and shock factor being tossed about is the technical achievements of this film crew. With a runtime of 85 minutes this movie has only 12 shots. Yes, you absolutely read that correctly. 12 shots. I support any filmmaker that wants to test his technical prowess with extended takes likes that.

What makes it the most impressive to me is the subject matter. Showing that level of violence without cutting away makes it feel so much more ruthless. In typical horror films they cut quickly to avoid you seeing too much. Here they used different ways to achieve this. Instead of seeing a character get hurt we hear it as we following a different character into a different room. This caused my imagination to do terrible things to this woman to cause her to make those noises. I love it when they do that.

I was very pleased with all three of the thieves. We’ll call them Head Thief, Strong Thief and Young Thief. They all played their part to keep the momentum of the film up. I was impressed with the relationship between Strong Thief and Young Thief. ST is clearly a bad ass who gives zero fucks and enjoys eating the family’s food and doing blow. YT is a compassionate young man who still has faith in people and wants nothing more than to keep the family safe. Watching those two interact is just priceless. Head Thief did what head thieves do, he handled shit.

If you want a tense, violent home invasion film, this is for you. No it isn’t a perfect film but it’s expertly shot and it will make you feel something for at least one of the characters. This is one I will be revisiting from time to time for sure. Enjoy

You like this review? Then why don't you read another great Netflix reviewThe Woman .
Posted by Unknown at 8:26 PM No comments: