“You don’t really think I would want to miss out on heaven, do you?” 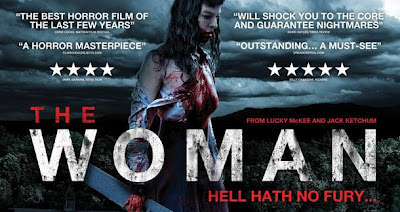 Great horror film sequels do still exist. Over the past few year I have been subjected to some truly terrible sequels, The Woman is my savior. This film is dark, gruesome, original and at times funny. That is basically every thing I look for in a horror film these days. Leave it the director of May (a disturbing film about an outcast) to break this cycle.

Lucky McKee’s The Woman, which is the follow up to The Offspring, an adaptation of the Jack Ketchum novel of the same name is a film to be reckoned with. This is very gruesome stuff, only intended for those us that can stomach it with a smile. If you can see through the gore and violence you will be treated to a very dark family drama with complex characters and interesting direction.
The Woman follows the surviving member of a clan of caveman like barbarians that were traveling up and down the coast of Maine, breaking into homes, murdering, and eating families. We pick up the story with her wounded and alone in the woods. A local hunter captures her and chains her up in his cellar with the intention of civilizing her.

The first thing that struck me was a beautifully shot title sequence. From there we move on to the family that will be holding her captive. An instant mood change from dead serious to fun lets us know that this movie will (hopefully) be a dark comedy. This is a complete departure from The Offspring, which was serious at all times. I feel this was a great way to bridge the two films.

The next thing to catch my eye is a scene where the patriarch of the family first finds the woman bathing herself in a stream. We see her through the scope of his rifle as he watches her. It’s at this point that something unexpected happens. Rock music begins to play as we take on his perception of her: a sexy naked woman bathing herself in slow motion. She dresses herself in what little clothing she has and walks away but for a split second we see her naked again. I believe this is to show how the hunter feels about her.


Sean Spillane's score for this film is absolutely amazing. I was expecting a traditional score but instead got unique songs that somehow completely reflect the mood of the scene. This score is one that I listen to daily. I certainly hope to hear more from this man soon.
This movie takes an “out there” concept and grounds it by using the real world family problems. The interactions between the family members could have been a film on it’s own.

One thing that always impresses me is when a director knows enough about his movie that he can summarize the entire film with one line or one dialog-less scene. In this case they used the latter and it could not have been more effective.

I have seen The Woman a total of 7 times since I first got my grubby little fingers on it and I will be surprised to see a better horror film this year. Enjoy.

The Devil's Rock
The Human Centipede 2
Posted by Unknown at 8:43 AM No comments: